Brexit: the energy story so far

With so much uncertainty surrounding the potential deal, if any, that the UK government are likely to secure with the EU next month, it’s little wonder that businesses remain in the dark about what impact Brexit will have on their energy supply.

Whilst much of the detail is yet to be confirmed, businesses can be sure that when the UK leaves the EU, there will be implications for the energy sector which will have a knock-on effect for their own operations.

See our Brexit infographic below for a breakdown of what we know so far: 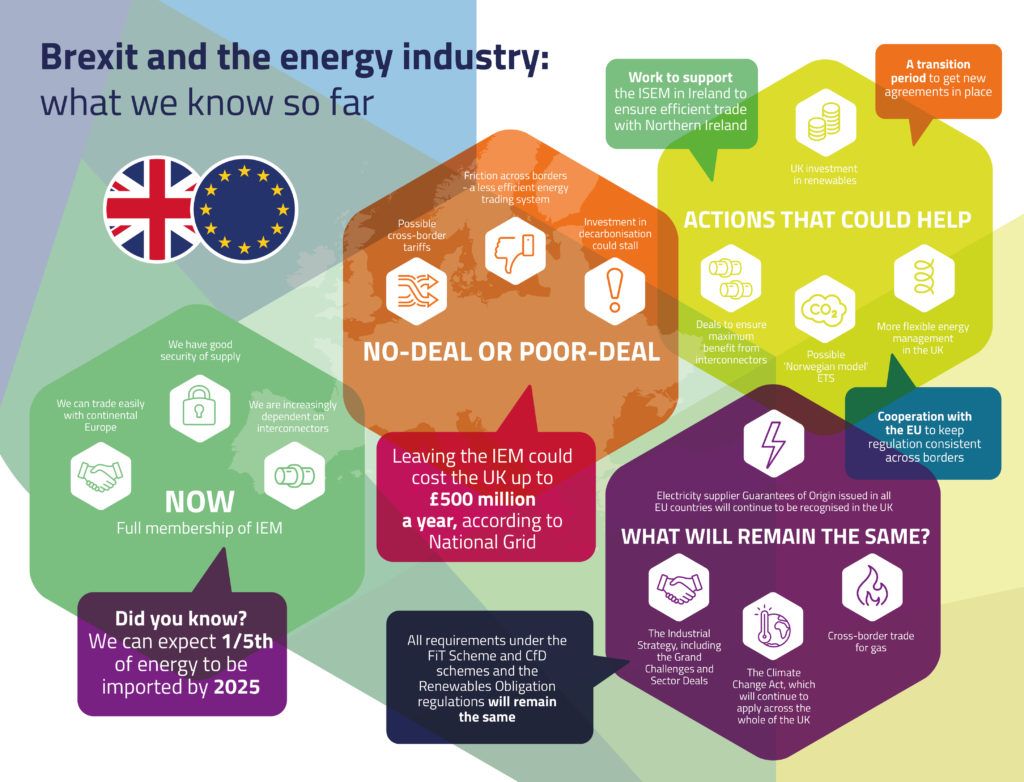 The UK is a net importer of energy; from interconnectors with continental Europe to LNG deliveries, mainly from the Middle East, we import both power and gas to meet our energy needs. Being part of the Internal Energy Market (IEM) makes it easier to trade energy across borders, keeping tariffs down, improving security of supply and facilitating the integration of more renewables on to the system.

Electricity Interconnectors play an important role in keeping our system balanced and accommodate more renewables on to the Grid and this role is growing: they are forecast to be the second largest source of electricity generation within the next decade. The gas interconnectors are arguably more important as the ongoing closure of coal-fired power stations and uncertainty over new Nuclear plants means that we will be increasingly reliant on gas to meet our needs when the wind isn’t blowing. Whilst few believe that cross-border trading would cease, leaving the EU without a deal would mean that trading could not be as frictionless as it currently is; which could unfortunately push up costs, reduce efficiency and perhaps also mean that our transition to a low carbon energy system could stall. It has been predicted that the impact of leaving the Internal Energy Market could cost the UK up to £500million a year.

In a worst-case scenario, leaving the IEM without the right agreement in place could also mean an end to the Irish Single Energy Market (ISEM), the ‘all-island’ market which has been hailed as a great success, which enables efficient and cost-effective energy flow between Ireland and Northern Ireland.

For these reasons, energy associations, generators and all interested parties are lobbying Government to ensure efficient trading arrangements across interconnectors. Continued investment in the development of those interconnectors would then be a positive outcome for both the UK and our European neighbours.

The UK’s membership of the EU and IEM also brings it under the EU emissions trading scheme (EUETS). Although the Government has committed to staying in the EUETS until the end of the current trading phase (2013-2020), the Government confirmed in the last Autumn budget that the UK would leave the EU ETS in the event of a ‘no deal’ Brexit. In the main part, this is because the UK would no longer have a say over the scheme’s rules. To do so, the UK would need to remain in the IEM and this would mean accepting the jurisdiction of the European Court of Justice (ECJ) in the area of energy and climate change – yet ECJ jurisdiction is supposedly one of the ‘red lines’ set by Government.

Going forward, carbon reductions will be supported by a new Carbon Emissions Tax, which will come into effect from 1 April 2019. The 2019 tax will be set at £16 per tonne of greenhouse gas emitted over and above an installation’s emissions allowance – which would be based on the installation’s free allowance allocation under the EUETS.

In the longer term, there are three alternative pathways which the Government may adopt to control carbon emissions in a post Brexit UK:

1: The UK adopts a ‘Norwegian model’ whereby it is linked to the ETS but with a much bigger share of cap than current European Economic Area (EEA) members. Norway has its own Carbon Credit Procurement Programme and about 50% of Norwegian emissions are covered by the EUETS.

2: The UK establishes own ETS, akin to the Swiss model, with a recognition of the other EU countries allowances. The issue with this is that it may be time consuming and difficult to set caps.

3: Complete separation is, arguably, the most straightforward option, but requires careful creation of UK’s own policy to address emissions in the traded sector.

The full impact of Brexit on energy prices and decarbonisation is not yet clear. However, a no deal would not only mean possible cross-border tariffs, it could also lead to a fall in the value of the Pound relative to the Euro and Dollar. As the UK purchases a proportion of its energy requirements in both US Dollars and Euros, this would push up wholesale prices and mean higher costs for consumers. There is some good news here though: as non-commodity costs are all in sterling they shouldn’t be immediately affected. This means that a 10% increase in wholesale electricity prices would only increase the delivered cost of electricity by around 4% (since 60% of the cost is non-commodity).

The effect on security of supply

While it seems safe to presume that interconnector flows will continue, the cost and efficiency of this may be significantly affected. In Ireland, the end of the ISEM would have serious implications on security of supply, and we can therefore expect special attention to be given to the issue during negotiations.  It is too soon to assess the impact of currency and uncertainty on future investment in energy infrastructure, but any reduction in investment could negatively affect our longer-term security of supply.

The importance of energy strategy

The overall message for businesses seems to be that in the short-term at least, a no-deal or poor-deal Brexit could impact the cost of energy and therefore your business’ bottom line. A renewed focus on your energy strategy could help to mitigate those cost increases. In the longer term, we should all be adding our voice to the argument for a frictionless cross border energy trade and continued investment in UK renewable energy sources.

For more information or to understand how you can optimise your energy strategy, call us on 08451 46 36 26 or email enquiries@inenco.com

Energy after Brexit – an update from BEIS
BEIS have issued an update on what might change when the UK leaves the EU, what will stay the same if there is no deal and what your business should consider.
Read more >
The energy industry seeks answers over Brexit
It’s this lack of clarity that makes Brexit as the second biggest challenge facing the energy industry today, according to the Energy Institute’s 2018 Energy Barometer. Moving up from fifth place in 2017, leaving the EU is clearly an ongoing concern for energy professionals, and many are calling on the Government to be more transparent […]
Read more >
What should energy managers be focusing on in 2019?
What should energy managers be focusing on in 2019?
Read more >