On 24th April in the midst of Lockdown, we looked at the impact on electricity demand in the UK and work that National Grid ESO was doing to maintain system security.

As we approach the end of summer and as lockdown continues to ease for most of us, it’s a good time to see how demand has recovered and also to consider the impact that the pandemic is having on non-commodity charges.

What charges are affected?

Most non-commodity costs are fixed at the start of the year and sometimes over a year before but BSUoS, FIT Levy and CfD levy can all change within the year. This blog will look at the likely impact on these charges but will also consider whether other charges are likely to be affected from April 2021.

In the most recent NG ESO Covid Preparedness Webinar on 12th August, the National Grid published the following summary of demand on the Transmission network compared with the normal expected demand for this time of year: 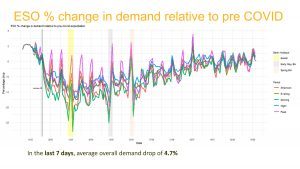 You can see that demand has gradually been increasing as lockdown eases and the average demand is currently levelling out at around 5% below normal expectations for this time of year.  NG ESO stated in an earlier Webinar that their most optimistic forecast is for demand to be 3% below normal by the end of the year.

In the middle of lockdown, the UK saw three bank holidays (Easter, VE Day and late Spring) where demand was lowest and the weather was generally both sunny and windy, resulting in high levels of embedded renewable generation.  This resulted in low demands on the transmission network, which risked instability due to a lack of generation that could provide frequency support.  To protect the security of supplies NG ESO carried out several balancing and settlement actions to increase demand for gas and biomass power stations including;

These actions all incur costs that are transferred to consumers via the Balancing and Settlement Use of System Charge (BSUoS). The highest such costs occurred during the late spring bank holiday when the balancing actions cost around £50m.

To see the impact of this we can review National Grid Forecasts and compare pre-Covid with recent data;

Unfortunately, the year started badly due to high wind speeds in January resulting in high levels of wind generation, which incurred significant balancing costs and this was made worse by a failure of the new HVDC Western Link, which is a subsea interconnector that allows surplus renewable generation from Scotland to be connected to a major substation at Connah’s Quay in North Wales.

Then, of course, came the Pandemic and the reduction in demand previously discussed. From February 2020 to July 2020 BSUoS charges have averaged £4.85/MWh, around double the original forecast.

We expect these charges to stabilise as we move into winter but feel that they are unlikely to fall as low as the original National Grid forecasts. This summer has also provided an insight into the impact of increasing levels of renewable generation and highlights the needs to build more electricity storage facilities and to encourage demand management by consumers over the next decade.

The FIT levy is collected to cover subsidies paid to smaller renewable electricity projects (under 5MW capacity).  The scheme closed to new projects in 2018, but participants are guaranteed subsidies for 20 years, so this levy will continue until March 2038.

The reason that the levy is reviewed quarterly is that the value is affected by both the amount of renewable generation, which depends on weather conditions and is also affected by demand.

It’s too early to say whether generation will be higher or lower than normal by the end of the year, but it is clear that the subsidies paid to generators will be collected from a small number of kWh of demand, so an increase of around 10% seems likely compared with forecasts at the start of the year.

The CfD levy pays for the large renewable projects, mainly offshore wind farms, that compete for subsidies through annual auctions. In the auctions, the bidders submit details of the size and generation potential of their project and the cost per MWh that they require to make the project viable. The auction selects projects by choosing a pre-defined total generation of capacity and then selecting the projects that have lower strike prices in order to minimise the level of subsidy.

This is the only subsidy scheme for renewables that is still open for new entrants and so is the fastest growing renewable levy.

Since the costs of this scheme are shared between consumers, the drop in demand will cause an increase in costs per kWh in the same way as the FIT ley is affected.  However, the level of subsidy is also affected by Wholesale Market prices.  When these are lower, the LCCC must pay a higher subsidy to the generator to cover the strike price.

Following Lockdown, wholesale electricity costs fell significantly, whilst windy weather at the start of the year meant that there was more generation than expected. This meant that forecasts for Q2 2020 showed that LCCC would not receive enough revenue from CfD levy payments to allow them to pay generators.  Fortunately, BEIS decided to address this by providing a loan of around £75m to LCCC to cover the shortfall for this period (equivalent to around £1.31/MWh) but this will be recovered in Q2 2021.

The LCCC interim levy is currently forecast at £8.532/MWh for the period from July to September but is forecast to be £9.733/MWh from October to December, a 14% increase.

It’s worth noting that the other renewable levy (and the most expensive) is the RO Levy. This levy is set at the start of the year by Ofgem based on forecasts of demand and for demand.  Since demand is likely to be around 3% to 5% lower in 2021, it is likely that this will increase the levy by a similar amount.

However, the more immediate question is whether the RO Levy collected this year will cover the total value of the RO certificates issued to generators?  If the shortfall in revenue is excessive, then there is a possibility that Ofgem could use the mutualisation system to recover lost revenue by imposing a surcharge on consumers.  If this happens then consumers may again receive an unwelcome mutualisation bill at the end of 2021.

If your electricity supply contract has fixed non-commodity charges, then you will be relieved to know that the higher costs are borne by your supplier. The supplier does include risk premiums to cover themselves for these eventualities, but on this occasion, the additional costs may exceed the risk premium.

However, suppliers will have been concerned about the risks associated with such significant changes in non-commodity costs, particularly BSUoS and we believe that future fixed non-commodity charges may include higher risk premiums or even a reluctance to fix out all non-commodity costs over more than a year. This may mean that managed pass-through contracts will offer lower-cost electricity if the risks are managed effectively.